The watercolors of Emily Carr 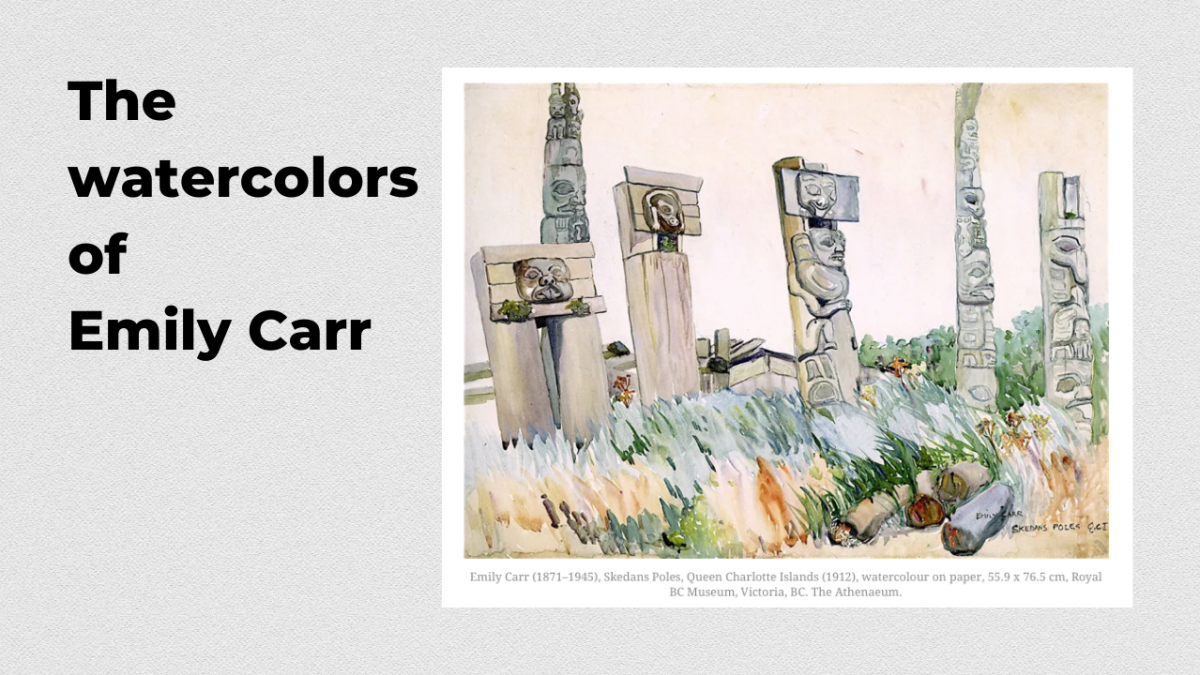 This article is part of a series about the watercolors of famous artists.

Do you know any famous watercolor artists? I mean “famous” like Picasso, Monet or Van Gogh?

While all of these painters used watercolors in their practice, we think of them as oil painters. For some reason that I haven’t figured out yet, none of the older painters chose to dedicate themselves to watercolors.

So, it has now become a quest of mine to discover the watercolors of famous painters.

We recently took a short holiday to Victoria, British-Columbia where we visited museums and art galleries.

Everywhere we went we saw paintings by Emily Carr (1871-1945) who would have celebrated her 150th birthday this year.

For those of you who don’t know her, Carr has become the Monet of British-Columbia, Canada. I know this because her work can be found in every major museum and art gallery in Canada and on mugs and T-shirts sold in those same institutions. 😉

Her work is beautiful, and she is recognized for her stunning paintings in oil and watercolors documenting the totems and buildings of the indigenous people of the north-west coast. She was one of the pioneers of Modernist and Post-Impressionist styles of painting in Canada, but she was not recognized until late in her life.

For me, it was a revelation to discover her watercolors. They are bright and fresh and show how taken she was by the beauty and color of the work of the indigenous artists she saw in her travels. One can only imagine how transforming the discovery of this work might have been for her.

If you are in Victoria BC, you can see her work at the Art Gallery of Greater Victoria and the Royal BC Museum and Archives.

(Disclaimer: This list contains affiliate links. If you use these links to purchase these book, Arts of Course may earn a small commission. Thank you.)

Want to paint watercolors you love and feel relaxed while doing it?
Here's just the thing to paint watercolors that are...
- fresh
- loose
- colorful
- and fun!
…the 10 juiciest tips selected from more than 200 passionate painters.
To receive your FREE Watercolor Tips PDF, just enter your email below!

By entering your email address, you're giving us permission to send you other watercolor tips, inspiration and special offers.
You can unsubscribe at any time.